I was unable to attend the November meeting - the following minutes were kindly taken by Linda Schiffer, who will be taking over the Communications position in January .... Carol


The meeting was held on November 12th, 2017 at the Catonsville Public Library from 2:00 pm to 4:00 pm.  There were 40 attendees including one visitor (Dolly Kaiser, mother of Mary Thomas).

Janet called the group to order and handed out birthday gift fat quarters from Free Spirit Fabrics to all the November birthdays - there were 4 present.

There were a number of fairly new members at the meeting so Janet asked each member to say their name, their favorite color to quilt with, and how long they had been a member.

After the introductions round, Janet explained that there was a motion to change the by-laws to expand the office of President (which is held to a 2-year term under current by-laws) to include a position for Vice President.  The VP would serve for 1 year in coordination with the President and then, in the second year of their term, rotate to become President.  This would allow for someone to help the President with their duties, for the President-elect to get some on-the-job training, and to provide a smoother transition between boards.  The motion was adopted by a massive show of hands from members present.

The next meeting will be held at the Owings Mills Library on December 10th from 2:00 pm to 4:00 pm and will include a holiday party and some swaps.  Janet will email the group list with details as soon as they are finalized.

Monica handed out tickets and Janet held a raffle for the members present.  There was one swag bag from retreat with all the excellent goodies provided by our sponsors, including a batt, threads, zippers, etc.  Anyone who had attended retreat (and gotten their own swag bag there) was prohibited from winning.  Also raffled with the same tickets were a new, donated rotary cutter and two sets of Double Wedding Ring templates from Virginia Findlay Wolfe.

Also created for the retreat but available to all the members is a gridded notebook with the guild’s logo on the front - just right for sketching quilt designs.  Members should please be sure to pick one up if they haven’t already gotten one.

There was some confusion as to whether the Quilt In A Box swap was finished and the organizer was not present to help.  Each box should have had ten people work on it so some were taken home to be completed.  They should all be returned at the December meeting to their owners.

Monica noted that the next class is scheduled with Debbie Greifka on March 10th (location t.b.a.).  She will be teaching bias curve applique.

Phyllis reported that there are currently 86 members.  Dues for 2018 are due to be paid no later than December 10th as we have to forward the Modern Guild their portion along with our membership count shortly thereafter.  The cost is $40 per year and can be paid by check or PayPal.

Elizabeth reported that the treasury has $7,100 dollars at present.  Workshop costs and expenses came out even for 2017.  The retreat lost about $200, mostly as fees to EventBrite which were unanticipated but will be factored into future retreat budgets.  She noted that $12 of each member’s dues goes to the national modern guild and that members receive many benefits from that investment such as the webinar on Wednesday, November 15th (check the Modern Guild website for details), Fresh Quilting program episodes, etc.

Janet commented that the guild has offered a bingo event in alternate years which has historically been well attended (200+ people at the most recent bingo) and had made $3000 - $4000 for the guild treasury each year.  This activity does require work from the membership to make prizes - both large and small quilted items - and to volunteer during the event.  Bingo has been held on Friday evenings in the past - a request was made to move it to Sunday afternoon.  The expenses are generally less for Friday nights but the costs for both will be explored by the bingo committee.  The membership voted overwhelmingly to do a bingo in the fall of 2018.

Rebecca Severt, as our FaceBook and Instagram (IG) representative, urged members to join IG and to include the guild on relevant posts, using @baltimoremqg or #baltimoremqg.  She is happy to help interested members ‘learn the ropes’ of using Instagram.

The charity quilt committee has arranged for two sew-in days to complete the top on Wednesday, Nov. 15th and Friday, Nov. 17th at Joann’s in Columbia, from 9 a.m. to 9:30 p.m.  Members are invited to drop in to sew or help in other ways as they are able during those hours.  (JA’s address:  6161 Columbia Crossing Cir, Columbia, MD 21045)

After the business meeting was concluded, there was show and tell followed by a group design activity.  There will be more details of this on our blog (http://baltimoremqg.blogspot.com)

Minutes taken by Linda Schiffer.  Any mistakes are her fault.  Smile.

Thanks to Rebecca S. for taking photos of Show & Share: 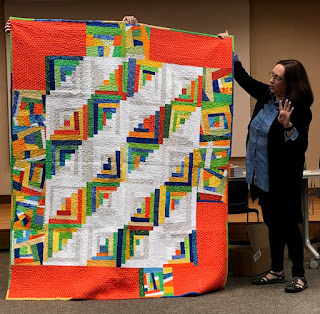 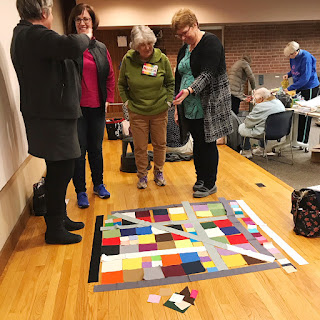 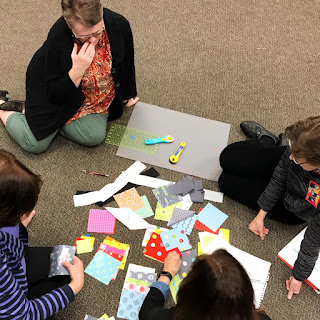 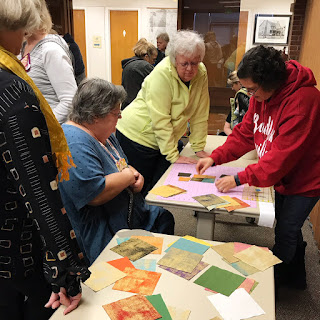 Will we see these completed at our next meeting?   :-D

On October 14, 2017 the guild hosted a workshop with Victoria Findlay Wolfe.  The workshop was for the Herringbone Pillow.  We were treated to a small trunk show, too.  Below are some of the photos I took at this very fun event! (Scroll down to the bottom for a great group photo!) 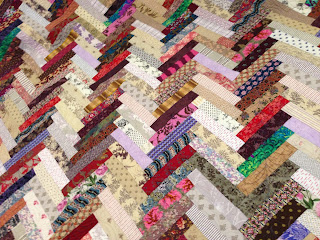 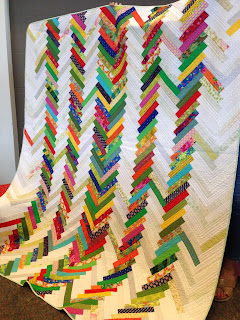 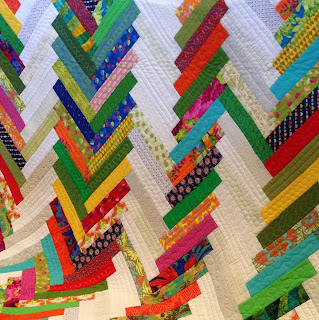 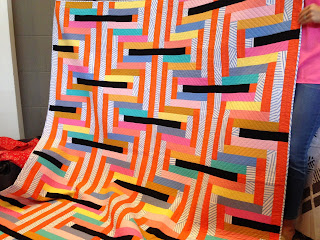 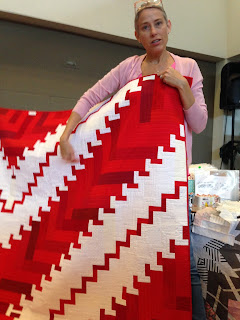 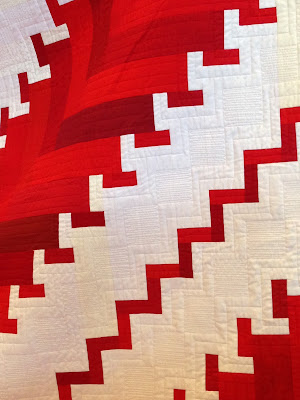 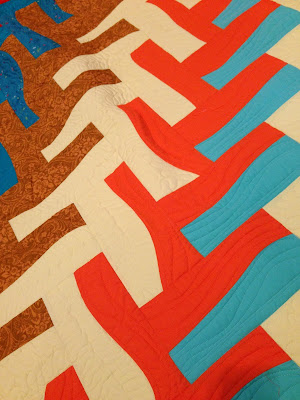 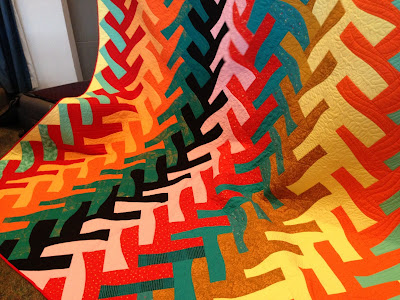 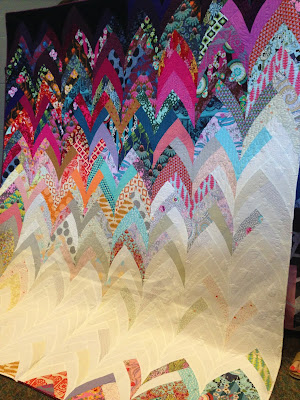 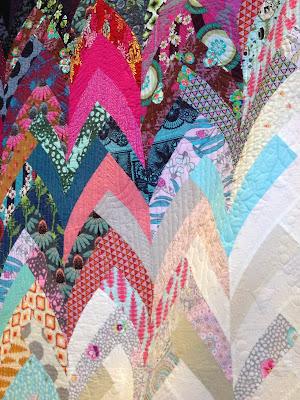 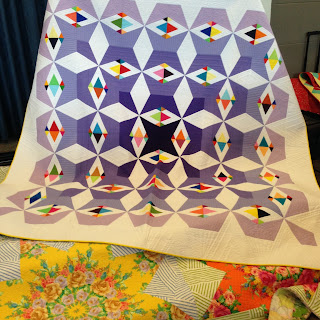 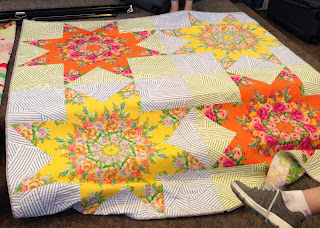 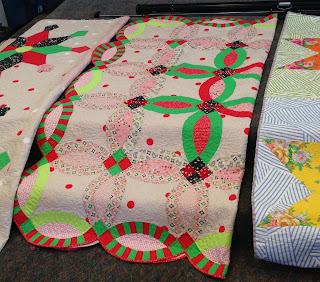 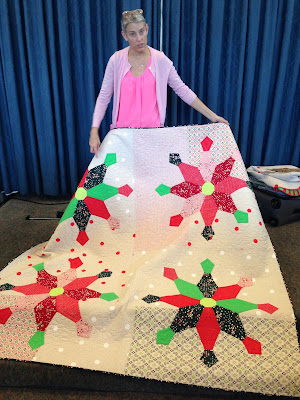 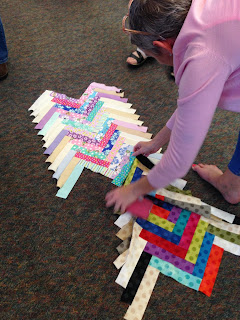 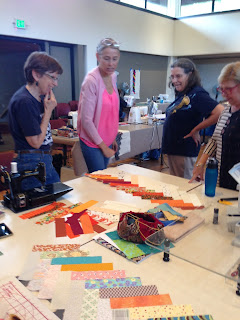 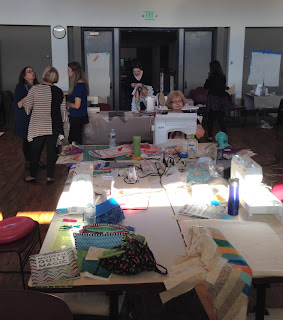 Here are a few works in progress... 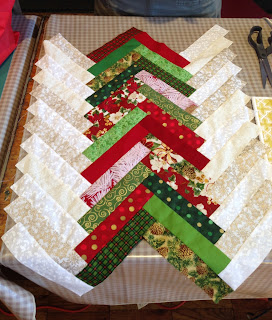 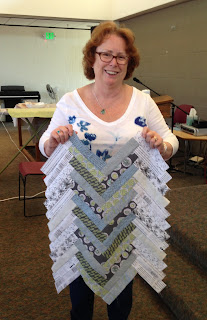 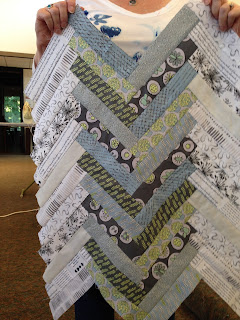 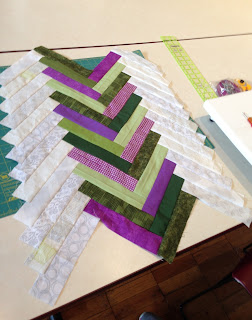 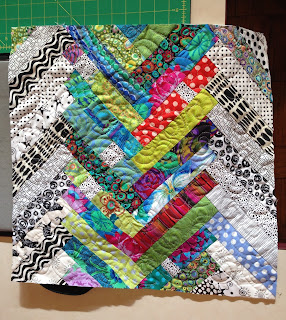 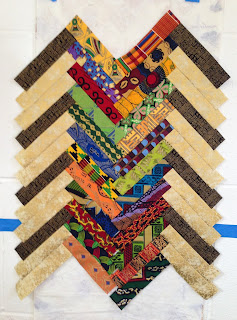 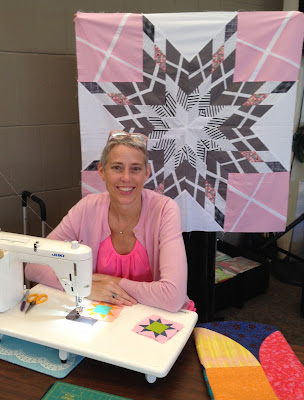